Lentisk oil is obtained from the mastic tree (Pistacia Lentiscus), an evergreen shrub typical of the Mediterranean area, which grows wild in Sardinia with low and bushy habit, leaves dark green, which has a strong and distinctive smell.

The fruits are small berries that ripen in autumn, going from white to red to dark purple, almost black when fully ripe. 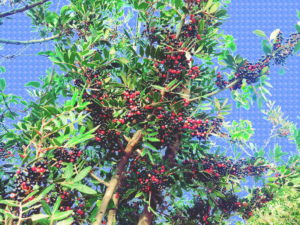 The trunk, if carved, produces a resinous substance called mastic (mastic of Chios, the most famous place where it was produced) still widely used today mainly by pharmaceutical companies, but also as a component for paintings and cewingum.
From flowers, leaves and twigs instead can be extracts the essential oil, from the berries, once they reach maturity is achieved, for pressing, a vegetable oil, known and used since prehistoric times [1]With the introduction of the olive trees, the use of this oil in the food sector is slowly decreasing, remaining relegated to only use as a medicine and as a fuel for lighting lamps, and then disappear almost completely to the present day.

Recent scientific studies are analyzing the composition, nutritional and health benefits of lentisk oil, often confirming what was handed down by folk medicine. 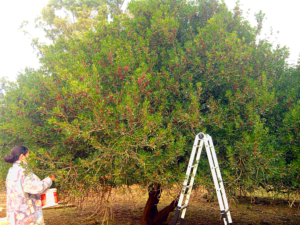 The mastic oil has shown a certain antitumoral effectiveness to combat the cells of some tumors: may therefore be regarded as an excellent supplement, at least to help to prevent them [4].

Also are ongoing studies to evaluate its effectiveness against Helicobacter pylori, a bacterium that causes gastritis.
Recently the mastic oil has wide interest in cosmetics and dermatology; thanks to its soothing and moisturizing action which could make it useful in the treatment of sensitive or irritated skin, or in cases of dermatitis (calm the burn, soothes inflammation) and may also be helpful against psoriasis. But numerous studies and in-depth are still ongoing  to determine their effectiveness and the absence of contraindications, which could be important in case of people who are hypersensitive to the active substances of the Mastic oil components. In short, it is recommended caution and information. 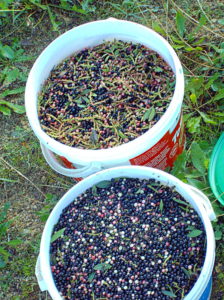 Lentisk oil properties were well known to our ancestors. The little imposing appearance of the shrub that produces it not would assume its immense quality.
Of the mastic tree can be used wood, leaves, resin, and especially the oil derived from the berries.
The properties of the plant and of the oil were already known from antiquity, when Hippocrates, Dioscorides and Pliny mention the multiple benefits for treating ulcers, to treat coughs and colds, for bruises; effective as a diuretic, anti-inflammatory, astringent and cleansing of the skin and soothing to several other diseases. The Sardinian tradition shows the use of this' oil as a remedy for many ills: pimples, acne, rheumatic pain, bruises ...
In the agro-pastoral world it is customary to prepare body wraps of leaves to heal wounds and deodorize the feet; often the young and tender leaves were interposed between the shoe and foot by those who was used to do a lot kilometers (shepherds, goatherds) or work in uneven ground (woodcutters), to prevent wound caused by rubbing in the feet.
Also in the agro-pastoral world he used to chewing the tender leaves for optimum oral hygiene and teeth cleaning.

Some archaeological discoveries have led to the hypothesis that even among nuragici was common practice to produce the oil from the mastic tree berries.

Until not long ago, the 'oil obtained from the berries was used in lamps for lighting, and as a substitute for olive oil in the diet. But the daily use of mastic oil, both in the feed, as in medicine, as in lighting, was less, when its use, now uneconomical, given the large amount of time required for the collection and processing, was replaced in the food industry from olive oil, now also accessible to the poorest families, and, in the energy field, from the arrival of the electric current. 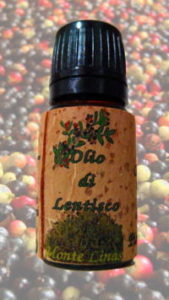 Recently we are seeing a rediscovery of this oil, so special and so refined, both for cosmetic and for medicinal use that food, like teach some excellent chef.

In a recent book (Blue Zone) Dan Buettner reports the results of his research: analyzing the areas of the world where the population is more long-lived and studying their lifestyles, locates in Sardinia one of five areas in the world with the highest centenaries density, characterized among other things by taking mastic oil.

All this does not mean that it is miraculous, or that it is the elixir of life, but it certainly has healthy and beneficial properties. It could be helpful in the prevention and treatment of various diseases.

© The present study on the lentisk oil is owned by Agricura - Andrea Ghiani, and is covered by exclusive rights. For a content reuse outside of this website require authorization. Unauthorized use is punishable by law.